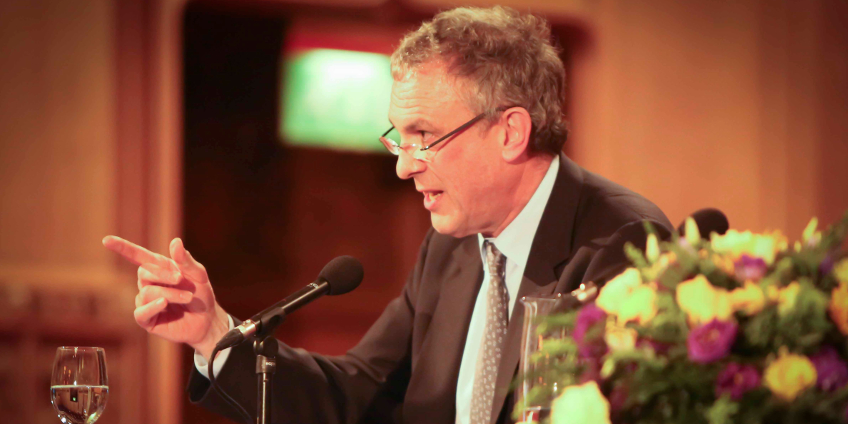 Yesterday evening saw Sir Simon Fraser deliver an insightful, facts-driven and uncompromising analysis of the United Kingdom’s place in the world following Brexit and recent developments in the United States.

Sir Simon Fraser GCMG is Managing Partner of Flint Global business advisory. From 2010 to 2015, he was Head of the UK Foreign Office and Diplomatic Service. He has also led the UK Department for Business. Prior to that he served as Chief of Staff to the European Trade Commissioner in Brussels, and as Director General for European policy at the Foreign Office. Within Flint, Simon leads on advice to clients on Brexit and international policy issues. He is Deputy Chairman of the Royal Institute of International Affairs (Chatham House) and is a Visiting Professor at King’s College London.

His speech reflected the complexities of building new trading partnerships post-Brexit and highlighted challenges around strategy, legislation, negotiation and the attitude needed to bring about a successful outcome.

Sir Simon reflected that the signs of dissatisfaction with increasing globalisation had been evident since the end of the last century, with a gradual decline in the appetite for far-reaching agreements. He commented: “It is true that leaving the EU will allow the UK to pursue a nimbler and more nationally focused international trade policy. Global Britain is a laudable goal. But it is ironic that we start by withdrawing from the world’s most sophisticated regime for free trade in by far our largest market. It’s a bold case of “reculer pour mieux sauter”.”

He pointed to the high level of trade that the UK currently conducts with Europe and that currently 44% of our trade is with the EU; 16% with the US; 13% with countries the EU has Free Trade Agreements with; 8% with BRICS; 9% with Commonwealth. Efforts would need to be made to continue all these trading relationships, but particularly those with Europe and the US.

As far as negotiations are concerned, he commented that negotiations would be complex, requiring a firm grasp of the opportunities and risk across a wide number of criteria. He reminded the audience that the UK would need to give concessions to win valuable trade deals.

Determination and enterprise would to be, he argued, key components of successful future trade negotiations. Innovative thinking was vital and that we must “respect other people and countries, and keep in mind the wider purpose of improving the lives of people at home and abroad.”

The lecture was followed by questions from the floor, an audience which included representatives of many City of London institutions and Livery Companies, Tacitus sponsors, the business community and students.

April will see The World Traders host The Tacitus Debate, where Sir Simon’s topic will be further debated by a panel of experts including Sir Simon Fraser, and chaired by Lord Tim Clement-Jones.

This year’s Tacitus Lecture and Debate was sponsored by Alembic Strategy, Aon Benfield, Bowers and Wilkins, and Global Trade Review and has received funding from the Commercial Education Trust.