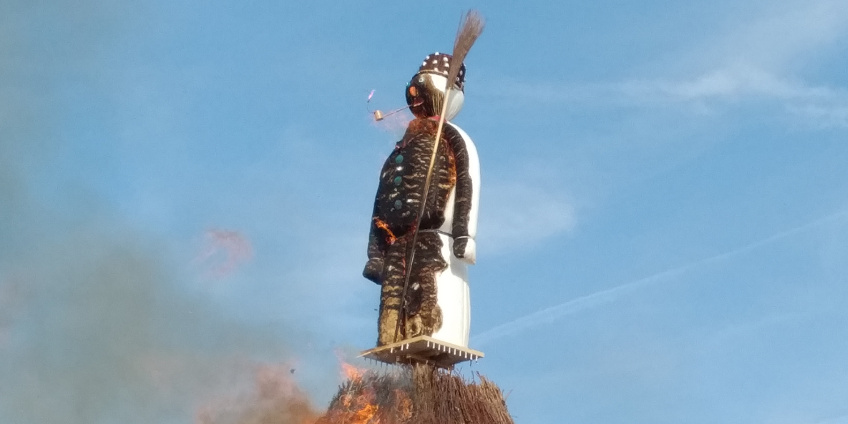 Last year, Wendy Hyde and I led a small delegation to this annual parade of the Zurich Guilds (Zuenfte), and attended the Widder Butchers Guild) ball with other London Liveries, watched the Childrens’ Parade, and got horribly soaked and frozen watching the main Monday Parade.  We were looked after by the Constaffel, the pre Guilds bourgeoisie who used to run the City. We dined with them in the evening. Unlike our former Clerk, Nigel Pullman, Sir David Wootton and the late Sir Gavin Arthur, we were spectators.

The Zurich Guilds are all-male affairs, and so I dropped plans to try to partner the World Traders with a Zurich Guild as this would not fit with our fine, inclusive ethos.

I did however accept an invitation to join the Zunft Zu Wiedikon, named after a Zurich district which contains their Hall, which was founded in 1897.

I hardly recognised my host, Ariel Goekman, as he and the other guild members wore 12th century style wigs and a variety of Mediaeval gowns and tunics.

The speech welcoming the guests, who included a former Miss Switzerland, Anita Buri, and the lady who organised the previous day’s Children’s Parade, last a full 36 minutes and the Master spoke for a similar length of time.  This was justified by the presence of the head of the Swiss Army, dignitaries from Winterthur, Canton Glarus, Basel and Geneva. There were a couple of hundred people in the room.

The Parade, with horsemen leading most Guilds followed by noisy bands, had many amazing floats.  Walking behind one had to watch out for the souvenirs, often in large steaming piles, left behind by the horses.

After 3 kilometres through crowds of thousands, many handing bunches of flowers to people they knew, we arrived at the Bellevue Platz where the Boog, a model of a snowman complete with pipe, was on top of a huge pyre.

This was duly lit and the cavalry of each guild galloped around three times each. Loud explosions inside the pyre.  The critical moment is when the Boog’s head explodes.  9 minutes and 56 seconds.  The record is about 4 minutes and the record for the slowest burn was in last year’s horribly cold and wet Parade -43 minutes.  A quick burn means a good Summer!  For the Swiss, anyway.

Parade back to the Aura, another meal with speeches and jokes, all in Swiss German, with wigs off.

At 9 we gathered outside, leaving the Master and Committee behind to welcome 3 visiting guilds.  We marched to a room above the main station to play the Sechsalautern theme March  outside before cramming inside where the designated herald made a witty speech teasing the rival guild and its Master but with gifts and compliments too.  The Master replied in kind.

Then off to two more livery halls, followed by a light supper and drinking until the small hours. One such visit and Swiss German humour made me peel off to my nearby hotel bed.