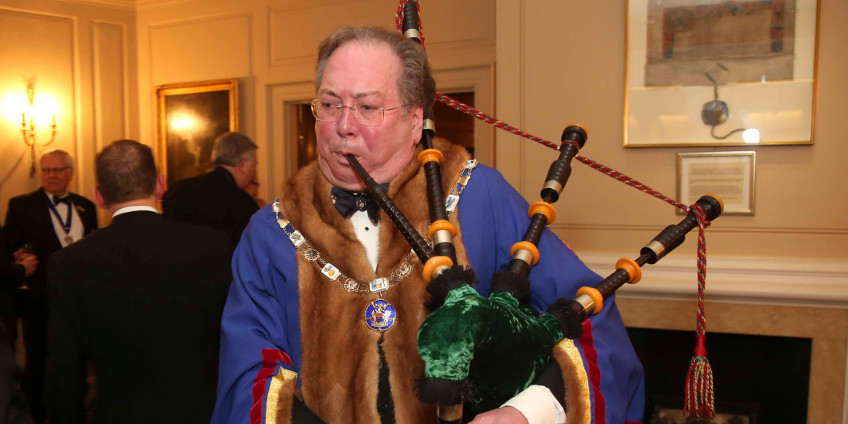 Yesterday evening our ceremonial court admitted two liverymen, Pauline Rafal and Jennifer Wood, and two freemen, Paul Accornero and Peter Michelmore.  In addition, in a special ceremony, we clothed Bertrand Olivier as an Honorary Liveryman in recognition of his devoted service as our Company’s Chaplain over the past 11 years.

The Worshipful Company of World Traders’ Members’ Dinner fell on Burns’ Night, so I felt obliged to herd everyone in to dinner with some piping.  The Beadle did forewarn the members and guest (Bill Emmott) to enter swiftly or the Master would “play the piper”.  The dinner that followed opened with a presentation to Bertrand of an 18th century map of his parish as well as a cheque for £1,000 raised by all the members so that he and his partner, Paul, can purchase some warm coats before he takes up his position as Dean of Montreal Cathedral.  We had two short presentations from Freeman Charles Lucas-Clements and Liveryman Mavis Gold on why they joined, followed by Eric Stobart raising a glass to absent friends, most notably last year our Past Master Peter Wildblood.  Our guest was the polymathic former Editor of the Economist Bill Emmott who spoke about his book, “The Fate of the West: The Battle to Save the World’s Most Successful Political Idea”, signed copies of which were given to every member.